Passage is culmination of combined effort 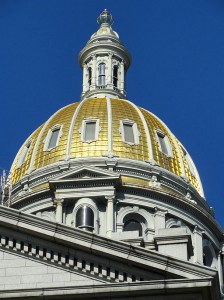 In reference books and public displays, diagrams show how a few simple steps lead to a bill becoming law. What these drawings don’t show are the behind-the-scenes passion, commitment and, in the case of House Bill 1347, The Colorado Immunization Bill, collaboration that propel a notion into a better way of doing things.

CAFP Executive Vice President Raquel Alexander called the immunization bill’s passage “a tremendous collaborative effort” and “an amazing victory for the CAFP.” Lobbyist Fofi Mendez, “It was a strong coalition effort. It was nice to see the entire process evolve and merge.

Signed into law April 26, the bill builds in three ways on the voluntary Colorado Immunization Information System that was begun in 1997. It expands the voluntary statewide registry to include patients who are 18 and older, as well as younger people. It adds newborn screening to the registry. And, it provides a directive for the Colorado Department of Public Health and Environment to explore more effective methods of increasing access to and delivery of immunizations throughout the state.

One proponent explained, “This bill is not about immunizations, but is about enhancing the functionality of the Colorado Immunization Information System to increase its value to health care providers.”

According to Alexander, “Larry Kipe, MD, originally came up with the idea and asked the CAFP to solve the immunization problems in Colorado.” His concerns included the availability and distribution of immunizations. After the vaccine shortage during the 2004-2005 flu season, he wanted to assure that mechanisms would be in place in the event of a future shortage so that patients would have priority for receiving the vaccine based on their risk factors. He also wanted to safeguards to assure that smaller purchasers, as well as larger ones, would be able to acquire vaccines.

“We had so many complaints across the state,” Dr. Kipe said. “Our practice was noticing that K-Mart and Safeway had the vaccine when we couldn’t get it for our high-risk and complicated patients.” He felt that legislation was needed to assure that doctors would have priority over retail outlets in distribution of vaccines.

“Then John Bender, MD, became the guiding force who worked with the pediatricians and the Colorado Children’s Immunization Coalition,” Alexander stated.

“John Bender has a passion for immunizations so I asked him to spearhead that issue,” Dr. Kipe said. “He volunteered and has done a marvelous job.”

Dr. Bender, who researched what other states have been doing, called the situation “deplorable” and said, “At one point Colorado children were some to the worst immunized in the nation.” The state is now 16th in the nation.

At a conference he attended at an alternate delegate for the American Medical Association Young Physician Section, he talked to physicians from Massachusetts, the state with the highest immunization rate in the nation. The state buys vaccine and distributes to physicians.

He called vaccinations “one of the best and cheapest innovations in medicine” and said that distribution needs to be a function of government, not the free market.

Alexander explained that as lobbyist Mendez “found the legislative sponsors, worked with the drafters to write the bill, and worked with the other lobbyists to get it through the legislature.” She worked closely with Ellen Brilliant, the lobbyist who represented the immunization coalition and the pediatricians.

According to Dr. Bender, Mendez also put the CAFP in touch with other groups that were eager to support the legislation. And CAFP member Jeffrey Cain was on the boards of both the CAFP and the children’s immunization group.

Among those who testified on behalf of the bill was Ned Calonge, MD, MPH, a CAFP former president and current member who is chief medical officer of the Colorado Department of Public Health and Environment. Among other things, he addressed the value of adding newborn screening to the registry.

“This program tests all newborns in the state for about 30 congenital conditions to aid in early detection and treatment,” his written statement says. “Providing access through the tracking system would allow pediatric health care providers a direct route for obtaining test results for the infants they are seeing in their office, as well as access to the benefits of the immunization tracking system.”

While passage of House Bill 1347 was a tremendous milestone in the effort to improve tracking of immunizations and infant screening, much remains to be done, including implementation of the new legislation. Dr. Bender is joining Family Physicians Dr. Cain and Martin Pirnat, MD, as members of the Colorado Immunization Information Coalition. The board of health is now authorized to explore better options for buying, selling and distributing vaccines.

He feels public education is crucial. He would like a change in attitude similar to that which occurred with smoking so that going without vaccinations becomes “not socially acceptable.” If people are educated, he feels, they will demand a more rational system for vaccine distribution and the legislature will fund that.

Dr. Bender said that people die every year of diseases that could have easily and inexpensively been prevented, such as whooping cough and chicken pox. If vaccination rates decline too much, he said, “We’re just one generation from having those diseases come back.” On the other hand, in the cases of some communicable diseases, if vaccinations are pervasive enough, the diseases may be eradicated and those vaccines may no longer be needed, as is the case with smallpox.

In addition to those mentioned above, organizations supporting the legislation included the Colorado chapter of the American Academy of Pediatrics, the Colorado Children’s Campaign, Colorado Public Health Association, and The Children’s Hospital.