Laramie County, WY – Cheyenne, Wyoming, a city that counts authentic cowboys among its 55,000 residents, appears to be an unlikely place for flooding. Summers in the former frontier town tend to be hot, dry and windy, while the winters are cold, dry, and windy. Waterways are narrow and some convey only a trickle.

But the southeastern corner of Wyoming, where Cheyenne is located, has a history not only of gun-slingers but also of disastrous torrents. While significant floods occurred in 1883, 1896, 1904, and 1929, arguably the worst was the tragic flash flood of August 1985. A thunderstorm developed over the city August 1, dumping more than six inches of rain in three hours. By August 2, the severe flooding, accompanied by at least one tornado and several feet of hail, resulted in 12 deaths and injuries to 70 people. Total damages exceeded $60 million.

To reduce the flood risk, the city, along with Laramie County, implemented a series of flood control projects. Four of these used resources from three different mitigation grant programs of the Federal Emergency Management Agency (FEMA), as well as other sources. Chief among them was the Dry Creek Flood Control Project, which diverts water in the segment of Dry Creek known as the Sheridan reach, where 11 of the 12 deaths occurred in 1985. It is the largest flood control project in the state’s largest city.

Governor Dave Freudenthal recalled the 1985 flood when he spoke at a ceremony marking the completion of the Dry Creek project. “I think I’m like most people in Cheyenne. You can remember where you were when the flood came,” he said.

“As you look at the size of these detention ponds, it gives you some recollection of the scale and amount of water that actually came through Cheyenne at that point in time,” he added. “These ponds are simply part of an effort to make sure that Cheyenne never endures that tragedy again.”

Completed in 2009, the Dry Creek diversion included excavation and construction of two detention basins and installation of about 1,950 linear feet of reinforced concrete drainage pipe measuring up to 10 feet in diameter. The drainage pipe combines with about 1,500 feet of open channel to form three links: from an existing reservoir, named Carey Reservoir, to one of the basins; from that basin to the second one; and from the second basin to Dry Creek just downstream of the Sheridan reach.

In addition, the U.S. Environmental Protection Agency (EPA) used funds authorized under Section 319 of the Clean Water Act for a wetland, which is downstream from the second basin. Designed to improve water quality, the small marsh also provides additional storage capacity. 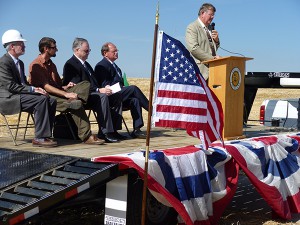 The governor and other presenters in Cheyenne 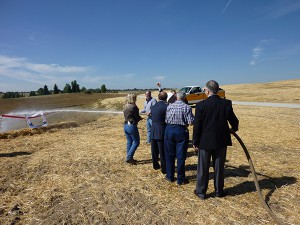