On the Trail of Calamity 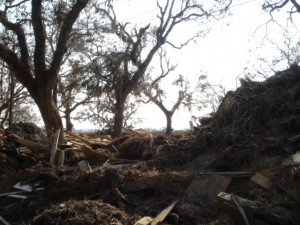 While others may think of the West Coast of the U.S. as running from San Diego north to Seattle, for me it is delineated by the San Andreas fault to the south and the Juan de Fuca plate to the north. Others may dream of visiting the Caribbean in the dead of winter. If I get back there it’s almost certain to be around hurricane season – or just after an earthquake.

This skewed sense of geography comes from my perspective as a reservist, or intermittent employee, of the Federal Emergency Management Agency. Working for the arm of the government that takes care of people following presidential disaster declarations, I’m part of a band of nomads who see the United States through cracked glasses. We travel throughout the nation, working for weeks in some of the most ordinary and extraordinary places while they’re at their worst.

We live tentatively, knowing that at any time we could be just a phone call away from sudden departure, but never knowing when that call may come or where we’ll be headed next. We watch weather news like hawks, realizing it may provide the first clue about our next adventure.

As soon as I get the go-ahead to deploy – and sometimes beforehand in anticipation of such a call – I shift gears from being a mother and freelance writer who is unable to commit to much of anything (I have to be available for FEMA duty) to being an intensely focused worker with a mission.

Before racing out the door with a fistful of unpaid bills and half-done to-do lists, I typically load enough jeans to last longer than a week, along with carefully chosen footwear. The job often calls for trudging through muck and debris, so shoes need to comfortable, sturdy and expendable. (For the same reason, FEMA workers stay up to date on tetanus shots.) And in case the disaster was part of a continuing pattern (which is often the case), I prepare for power outages with a flash light, transistor radio and candle.

It seems that the more time I have, the more I think of to cram into my suitcases. Like Odysseus, reservists are never quite sure what we may encounter before we see home again. We often chase disasters from one place to another as hurricanes move up the coasts, storm systems spawn tornadoes in several states or floods flow from one river to another. What if I first go to Philadelphia, but end up on St. Thomas? Since packing light is out of the question, I drag along plenty of stuff for all the different situations I imagine. Luckily, I generally have less than 24 hours for such imaginings.

Usually the most remarkable thing about flights to disasters is that FEMA employees travel in packs as several hustle to work at the same destination. Occasionally we run into trouble in our fervor to get to a disaster site as quickly as possible. A friend wrote to me about trying to beat a storm to Atlanta, only to arrive at about the same time as the hurricane remnants. “The plane pitched and rolled – was hit by lightening at least once – fell, climbed, bucked, fell again,” she wrote. “I was truly terrified.”

FEMA workers take whatever accommodations are available, which can range from the sublime to near slums. In the worst disasters, the pressure on hotel space, which may be reduced due to recent damages, is terrific. From the agency’s point of view, displaced residents have the highest priority. In addition, FEMA folks — along with Small Business Administration staff, insurance adjusters, power company linemen and others who come after calamity — scramble for rooms.

The best room I’ve had was at a five-star hotel in California. Knowing that I would be sent the next day to work closer to the epicenter of the 1994 Northridge earthquake, I opted to pay the difference between the luxury resort’s government rate and my lodging allowance. As it turned out, I was glad to have indulged myself. Later, staying right on the epicenter, aftershocks jolted me out of slumber into an adrenaline rush almost every night.

The worst room I’ve heard of a FEMA worker taking was in a bordello in the Marshall Islands. According to unofficial agency legend, the worker discovered early in his stay that his room was being used for business purposes while he worked. Out of fear of losing the only bed he had, he waited about a week, until he had established a rapport with the proprietor, and then complained. Afterwards he had the room to himself day and night. The same worker was absolutely unmotivated to move into another hotel when he found a tick in his bed following a stateside disaster.

Rooms often come with reminders of disaster. Early arrivals on St. Thomas following Hurricane Marilyn in 1995 recalled carpets that were squishy with water, while later arrivals were certain that their ocean views would have been more spectacular had they not been obstructed by plywood.

Just as there is a wide range of accommodations, food varies from wonderful to “I wonder what that was.” The best food I’ve heard about was some lobster a fellow worker had following Hurricane Iniki in 1992. He had arrived on Kauai just after the storm, while debris and overturned cars still littered the roads. As soon as he set out in a rental car, he was changing tires flattened by debris in the roads. At the end of a wild day without lunch, his only hope for dinner was to join disaster survivors and other workers for a bologna sandwich at the still-soggy Salvation Army mess hall. The lobster feast, donated by restaurants that had lost power along with the rest of the island, was a welcome surprise.

More often when workers eat with survivors, we are reminded of the dire conditions of those touched by disaster. When I was on St. Thomas following Hurricane Marilyn, I was assigned to work for a few days in a remote area. We FEMA workers could choose between food provided by the Red Cross, which can best be described as being similar to school lunches, or MRE’s – those meals-ready-to-eat that came to public attention during the Gulf War. Suffice it to say that the cleverness of MREs – they are formulated to deliver about 1,250 nutritionally balanced calories, but many also come with a flameless chemical heater – far exceeds their gustatory merits.

Most meals fall somewhere between the surprise lobster feast and bland calories with extended shelf life. After working long hours elbow-to-elbow in a makeshift office, I often forage along the roadways in search of something to gulp down at the hotel before collapsing. I head for one drive-through if I want a burger, another is my palate dictates chili, or yet another if I crave a baked potato.

Regional specialties are often as easy to come by as fast food. I’ve had grits and barbecue in the South, johnny cakes in the St. Thomas airport, crab cakes at a Maryland street fair and rice dishes in Miami and Puerto Rico.

It’s important to nourish the soul as well as the body, so I make a point to dine sometimes with my fellow workers. Like other office workers, we talk about work and other shared interests. Sometimes we compare hotel services, but more interesting stories have come from those who have worked Pacific island disasters. On a rainy, winter day in Oregon, it’s good to travel in our minds to warm places where women go bare-breasted, men show their amorous intents with carved sticks and people trade in stone money.

Circumstances often foster the development of close relationships among workers. On my first major disaster, as I abandoned family and other work to administer to survivors, I felt like I had done the writing mom’s equivalent of joining the circus. Part of the allure was solitary travel. Now, though, I’ve become friends with people I see in various combinations across the country. We’re a close-knit tribe with both squabbles and marriages within the ranks.

Everywhere we go, we see an often-hidden layer of individuals and communities as our work brings us into contact with those who have recently been traumatized by disaster, as well as local leaders of recovery efforts. Though disaster can bring out the worst in people, it more often brings out the best. Following the Northridge earthquake, I was struck by the tenacity with which survivors held on to their shaken dreams. After floods in Idaho, I was wowed by the skill and dedication of newspaper reporters, congressional staffers and agricultural experts.

Some of my best breaks from work come from visiting with relatives or long-time friends. When I was in Puerto Rico, my friend Sudan took me shopping at the local market, far off of the tourist-beaten trail. At her home, amid the music of tree frogs and the chatter of her family, we reminisced about our Louisiana high school.

Because I’m on the road so much for FEMA, I’m not interested in a lot of recreational travel. Susan closed a letter to me saying she hoped to see me in the months ahead. From a personal point of view, I like that notion. But, since I live always in anticipation of disaster, I’m not so sure it’s a good idea.