…but there’s still plenty to do around the Crescent City 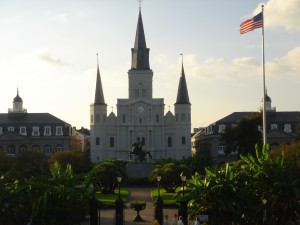 There is a well-known New Orleans that is off-limits to children, and even upstanding adults. Hawkers beckon customers into it to see the “Live girls: No cover charge.”

But there is another New Orleans as well, where boat whistles and streetcar bells sound out with sidewalk saxophonists. It is home to singing birds and videos that tell of Louisiana’s unique ecosystems and cultures. This New Orleans is full of children’s laughter.

Despite its long-term notoriety for serious revelry, the Crescent City is also a place where family fun prevails.

With three major areas separated by a host of other exhibits and interactive displays throughout, the Audubon Zoo can easily provide a full day’s diversion. Located on 58 oak-shaded acres between Magazine Street and the Mississippi in Audubon Park, it is accessible from the Riverfront (the area along the river on either side of Canal Street) by car, streetcar, bus and boat. The original zoo grounds contain the Asian Domain, home of a rare white tiger, as well as Wisner Children’s Village, where children can walk through tunnels and peek out of domes for a prairie dog’s view of a prairie dog town. Around the corner, volunteer “edzoocators” tell about the specimens they hold and allow visitors to touch.

Three buildings cluster in the second major area. A rain forest has been created in the Tropical Bird House, while endangered Ridley sea turtles, mesmerizing as they swim about their tank, are among the residents in Reptile Encounter. Between the two, Pathways to the Past contains interactive displays that pose various questions about dinosaurs, including how the giant reptiles may be related to birds.

The third area, the Louisiana Swamp Exhibit, presents folklore along with flora and fauna. Humans are restricted to wooden walkways over a wetland where some specimens roam freely. Alligators and turtles bask in the sun, black bears frolic and raccoons forage at the water’s edge before settling into a tree – upside down.

In another part of the exhibit, both marine and land animals can be viewed behind glass. Among them are white alligators (thought to be symbols of good luck), muskrats, nutria,  opossums, snakes and frogs. A moss-draped swamp monster, a sculpture with human-like form, captures the imaginations of children.

Additional exhibits include World of Primates; Australian outback, new home of a young Koala; and Grasslands of the World, a series of three vast stretches that separates the major areas.

Down by the Riverfront

Another day or more can readily be filled exploring the Riverfront vicinity. Walkways along the riverbank allow ongoing observation of maritime commerce and centuries-old buildings are among the reminders of French and Spanish domination. Street performers are apt to be encountered day and night.

The most popular new attraction here is the Aquarium of the Americas, overlooking the Mississippi at the end of Canal. It focuses on some of the foremost aquatic environments of the Western Hemisphere: a Caribbean reef, an Amazon rain forest, the Mississippi River (look out for more white alligators) and the Gulf of Mexico. A fifth area examines how color, shape, sense and other factors work for fishes’ survival.

Like the zoo, the aquarium is operated by the Audubon Institute and, like the zoo, it mixes animal exhibits with cultural insights and hands-on interpretation. For example, barnacle-laden metal bars in the Gulf of Mexico exhibit show one way marine life has adapted to oil drilling. In the “micro lab,” visitors may handle shells and preserved specimens, while touch pools allow enthusiasts to get close to live animals.

Jackson Square, located in the French Quarter near the Riverfront, is at the center of several family attractions.

Louisiana’s Living Treasures is akin to a perennial craft fair. It is located on the third floor of Jackson Brewery, a former hops house that has found new life as a trendy shopping mall. Items that are made onsite include pottery, wood carvings, jewelry and dolls. Continuous videos and weekend musical entertainment celebrate Louisiana culture and ecology.

Located on Jackson Square at 514 St. Peter Street, Pontabla Historical Puppetorium is part shop, part museum. In addition to selling a variety of puppets and dolls, this establishment presents “The Legend of Lafitte the Pirate.” In a dozen glass-enclosed tableaux, a coast of 50 endearing marionettes, their strings pulled electronically, act out the life dramas of pirate and patriot Jean Lafitte.

A few blocks away, heading down Decatur away from Jackson Brewery, is the French Market, where fruits and vegetables in all shapes and colors are sold, along with seafood, including some that can be shipped home, and dry goods.

Two museums that appeal to families are located in the Riverfront vicinity. With realistic detail, the Musee Conti Historical Wax Museum, 917 Rue Conti in the French Quarter, freezes in time important events in the city’s history.

Distinctive exhibits at the Louisiana Children’s Museum, located on the other side of Canal at 428 Julia Street, include a replica of a St. Charles streetcar that children can pretend to drive. In a variety of waterfront displays, children may don hard hats and life jackets, use a pulley to move cargo, and drop a line for magnetic fish.

A good place to see carnival regalia is at Blaine Kern’s Mardi Gras World, which is located just a short, free ferry ride across the Mississippi from the end of Canal Street. Since 1947, Kern and those in his employ have made floats for the city’s processions and now they produce parades around the world, providing floats, sound, lighting – whatever is needed.

Visitors to Mardi Gras World may try on elaborate headgear that has been part of carnival costumes and may also walk through warehouses filled with floats made in the likeness of such characters as Fred Flintstone, Mickey Mouse, and Alice and the rest of the Wonderland crew. Observers may also watch artists at work on floats.

Away from the Mississippi

While many outstanding family attractions in New Orleans are located near the river, a few are elsewhere. City Park, located off of Interstate-610, contains the New Orleans Museum of Art and Storyland, where children may play on the Jolly Roger or in Cinderella’s coach. The park extends north to Lake Pontchartrain, where hundreds of boats dock in marinas and where kids enjoy Lakeshore Park’s many playgrounds.

Further east, the Louisiana Science and Nature Center is located south of Interstate-10 at exit 244.

By its own admission the center “celebrates the relationship and interdependence of man and his natural world.” The interpretive center includes a planetarium, as well as displays where visitors may channel water, go into a model of a cypress tree or observe live turtles and alligators. Also there, they may play a game that shows the difficulty shrimp face in surviving from conception through adulthood. Few complete the growth process.

Outside, short and long trails bring nature-lovers into the 86-acre wildlife preserve.

Those who pause to listen may hear the cawing of birds, blending with the whir of urban traffic. And, perhaps, some children’s laughter.